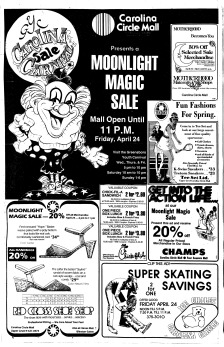 Well, this is kind of awkward. There' hasn’t been any posts made here in over a year and a half! That is simply due to the fact that there really hasn’t been much to report in the world of Carolina Circle Mall, unfortunately. I am still very much alive and still as obsessed with this long-gone mall just as I ever was! In fact, I did find a few artifacts from the 1980s that I will be sharing with you guys, so stay tuned!

Now here’s something I’ve been after for many many years. This is actual video footage inside Carolina Circle Mall. This was recorded on Sunday, May 5th, 1996. Hopefully we can find more footage from the mall like this someday. 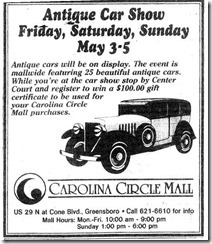 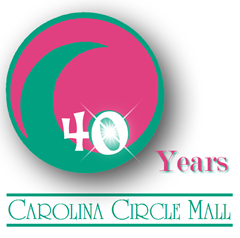 Been awhile, huh? Well, the reason behind the lack of updates here at the Carolina Circle City blog is simple. Microsoft stinks. For the last several years, I have made all of my posts using “Microsoft Live Writer”, which worked brilliantly for many years…until it decided to no longer play nicely with Google accounts.

Thankfully, I have found another program that’s based off Live Writer, except the darn thing actually works! This program is called “Open Live Writer” and discovering it has really saved me, meaning posting will resume. 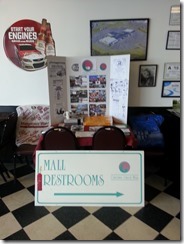 Anyway, what’s new in the world of Carolina Circle Mall? Well, the big thing to talk about is the 40th anniversary party that was held at Monk’s Cheesesteaks on August 6th this year. It was a small turnout but it was such a blessing to meet all of you folks who went to the mall and even worked at the mall when it was still around. I had a lot of fun there and I hope you did. I know my aunt really had fun there, reminiscing on old times. The photo on the left is of the display I had setup at the party. Again, to those who came and to those who supported it, thank you very much! I really mean it.

Also, I am currently in the planning stages of writing a book about Carolina Circle Mall to potentially have published. It's not going to be a boring history book about the mall but instead, a book detailing memories and experiences people had at the mall. Because of this, I am looking to sit down and interview people who worked at the mall and/or visited the mall very regularly when it was opened. If you are interested, please let me know. Your input will be GREATLY appreciated. This is something I've been wanting to do for years and I'm now determined to make it a reality. If you’re interested in helping, email me at carolinacircle89@gmail.com. 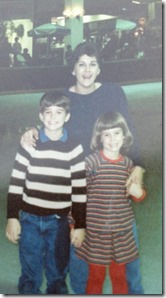 Here are some people standing on the Ice Chalet sometime in the 1980s. 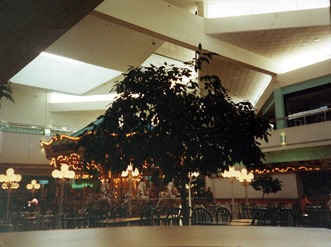 Here’s an interesting picture of a tree with the Carousel standing behind it sometime in the early ‘90s. This picture was taken from inside Monk’s. 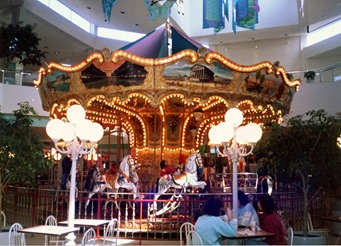 Here is a really good shot of the Carousel sometime in the early ‘90s. Really brings back memories. 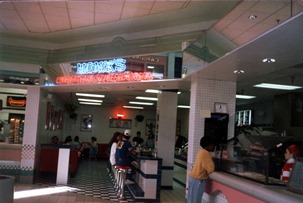 Here’s a great photo of the outside of Monk’s Cheesesteaks and Cheeseburgers sometime in the 1990s. Part of either Circle Café and Deli or Subs and Spuds can be seen on the far left of the picture.

Carolina Circle City is in no way affiliated with Alpert Investment Corporation, Sunshine Properties, or Zamias Services, Inc. This is only a fansite.

Any challenge to copyright is not intended.

To view a large size version of any picture, simply click the thumbnail located in the post.